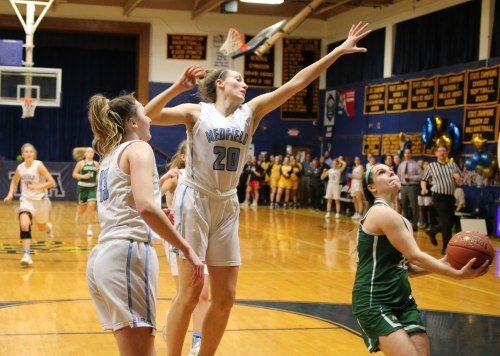 And who could blame him.

They had won seventeen straight games.

But the Warriors (17-2) held off the Sachems, 47-42, on Monday night to win the Division 2 Spartan Classic and end a long (17-games) Pentucket win streak.

This was a one-possession game (44-42) with thirty seconds left and Pentucket had the ball.

During most of this game, Medfield’s length and their zone defense severely disrupted Pentucket shot attempts close to the basket. The Warriors were tall enough inside that they discouraged as many inside shots as they blocked.

Both Angelina Yacubacci and MacKenzie Currie put up game-tying attempts through a host of tall defenders in the closing minute but neither shot fell.

Fatigue was likely a factor in the Pentucket loss. The Sachems rely on a high-energy defense and have a short bench. Playing at that pace for two straight days is tough.

Medfield pressed early but spent most of the game in a half-court zone defense. That approach kept them out of foul trouble and required less exertion.

The Sachems had a 17-13 lead after an Angelina Yacubacci layup and one MacKenzie Currie free throw four minutes into the second period.

The next seven minutes of playing time were a complete disaster for the team from West Newbury. They didn’t score a single point while Medfield added fourteen in a row!