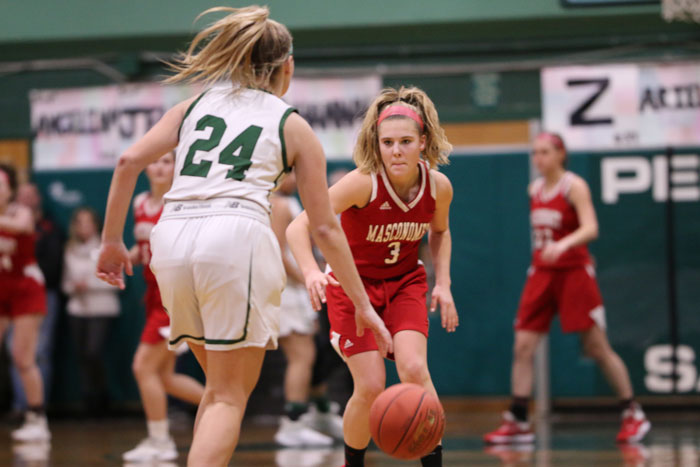 (West Newbury MA) Masco led by nine after one period.

Pentucket led by one at the half.

Back and forth it went all night long.

There were eleven lead changes with at least two in each quarter.

It was anyone’s game right down to the last shot by Mak Graves (16 points).

The Sachems (19-1) played with fire in the last eleven seconds and didn’t get burned.

Pentucket had the ball with eleven seconds left and a two-point lead.

“I was so scared to throw it too far that I didn’t throw it far enough,” explained Angelica post-game.

That put Masco in possession and very quickly Mak Graves had the ball in her talented hands and she was stepping back beyond the arc.

“I was petrified,” said Coach McNamara. “I thought she was going to pull up and shoot a three. They had the ball in their best player’s hands and that’s scary. I was happy when she drove because a two would let us keep playing.”

“It was nerve-racking with her at the 3-point line,” said Greta Mauer, “because you don’t know what could happen.”

Angelica, who had thrown the bad pass reacted quickly. “I knew that I had to play defense (on Mak Graves) and get the ball back,” she said.

When Mak stepped back, Angelica stepped forward to discourage a 3-point attempt.

Angelica Hurley steps out to discourage a 3-point attempt

Mak chose, instead, to drive baseline. The Pentucket defense closed on her and her shot missed. Angelica was there to secure the rebound and the game ended.