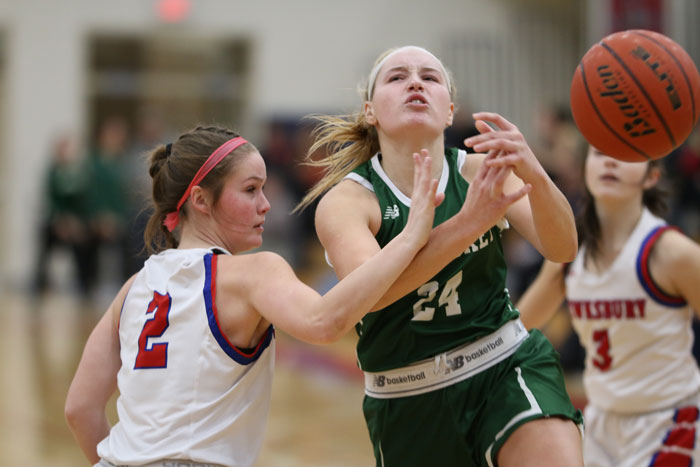 (Tewksbury MA) Everyone had a beef with the referees.

Pentucket coach John McNamara, coaching against the school he graduated from, questioned many calls.

And me? In comes Angelica Hurley for the buzzer-beating winner and the referee intrudes into the special shot.

Angelica’s last-second shot was indeed the game winner as Pentucket escaped with a 36-34 victory over Tewksbury on Sunday afternoon.

“We struggled,” said Coach McNamara afterwards. “We didn’t shoot the ball well at all.”

The teams were quite familiar with each other having faced off in the D2 North finals at the Tsongas Arena eleven months ago.

The Sachems (18-1) took that one, 56-45, and went on from there to win the D2 state title. Today’s victory runs their winning streak to fourteen. Last loss was to Masco on January 3rd.

“They’re a tough team to play against because it’s hard to simulate their style of play in practice,” explained Coach Bradley. “We had a game Friday night so there was little time to prepare.”

“We took their aggressiveness and used it to our advantage,” said Coach Bradley recalling how his team fought back to leave with a 19-19 tie at halftime.

Of the Redmen’s comeback, Coach McNamara said, “We missed three’s, there were long rebounds and they were off to the races in transition.”

In this game, Tewksbury didn’t give up backcourt turnovers and were quick enough to get back on defense after missed shots. They also had shot-blocker Alli Wild in their defense.