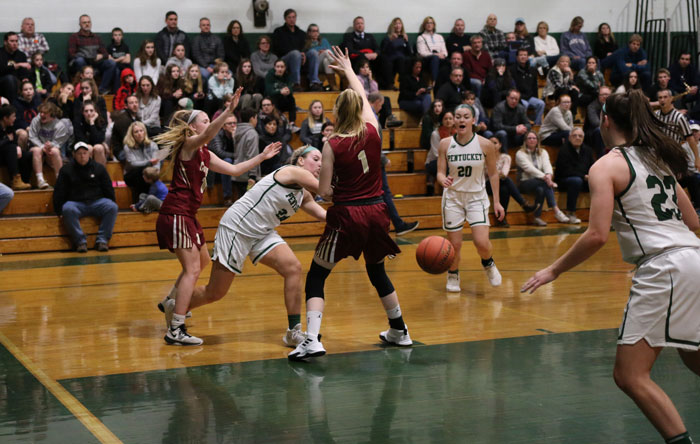 (West Newbury MA) It doesn’t happen every game but when it does…..watch out!

Pentucket was excellent on both ends of the court and that put Newburyport on the wrong end of a  58-24 score on Friday night.

“Our girls came out with a ton of energy and played great defense,” said Pentucket coach John McNamara afterwards.

The Clippers (9-6) ended up with a night full of tough shots and turnovers.

Pentucket mustered only thirty-eight points in the first meeting (January 20th) with Newburyport.

“Last time was a different style of game,” explained Coach McNamara.  “They controlled the tempo with their 1-2-2 halfcourt defense.  This time our defense got us going offensively.”

The Sachems had thirty-six points in the first half alone and were comfortably ahead, 36-15, at that time.

The Clippers had won three of their last four games including a shocker over Masco.

Tonight, the score was tied (4-4) after three minutes before Pentucket began putting everything together.  On this evening, the visitors had no answers.

The Sachems ran nine unanswered points together and never looked back.

In this breakaway segment, Angelina Yacubacci (16 points) assisted on an Arielle Cleveland jump shot and a Hannah Lambert triple.

The nicest play in this collection of points was an Arielle Cleveland save of a ball going out of bounds that ended up with an Angelica Hurley (11 points) 3-pointer.

Pentucket was ahead, 13-7, after one quarter.

The Sachems put a 23-point second quarter together.  Freshman Abby Dube (12 points) had two beyond-the-arc three’s and one old-fashioned three in the high-scoring quarter.

“I tend to think a lot when I shoot,” explained Abby post-game.  “Tonight, I was just playing and having fun out there.”

Abby’s twelve points were a career high for her.

Most of the night the Clippers had trouble getting to the basket as well as getting the ball inside to their tallest player, Abby Gillingham.